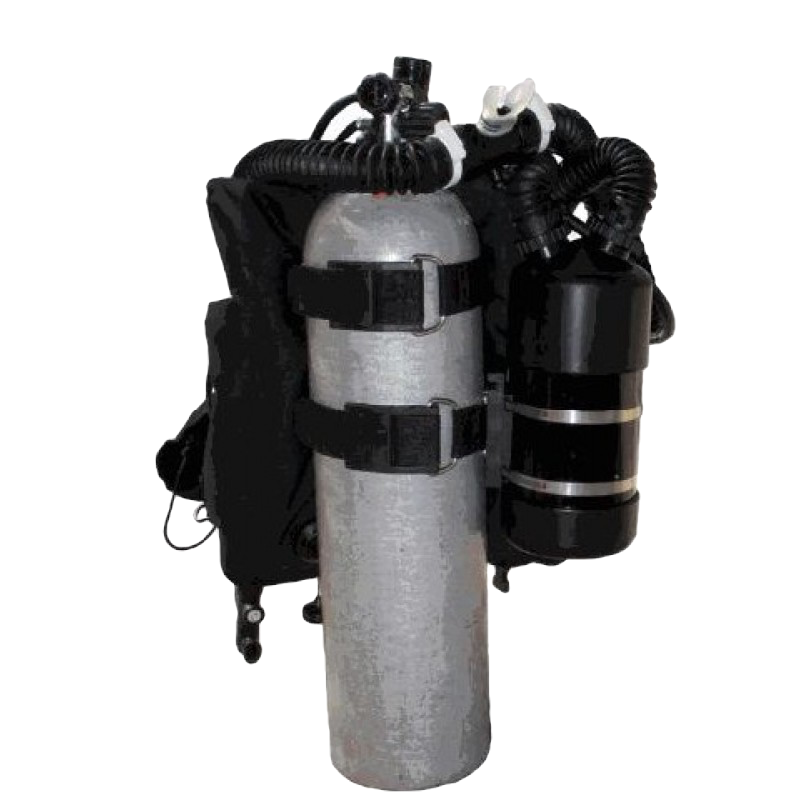 SKU 00004
$5,116.00
In stock
1
Product Details
Semi-closed rebreather systems differ from their fully-closed counterparts in a number of significant ways.
Instead of requiring two gas sources (oxygen and a diluent), they use only one gas source, which is Nitrox mixes of 32 percent and above. Perhaps the best way to think of a semi-closed rebreather is as an efficient gas extender, which gives the diver the ability to extend the duration of a given gas supply by as much as a factor of three, compared to open circuit use. There are also the added benefits of breathing warm moist air, which helps reduce heat loss and dehydration, along with the reduction of bubble noise, which won’t scare off some of the wildlife.

Currently there are three types of semi-closed rebreathers on the market:

The first is the active-addition semi-closed rebreather's (SCR), which bleeds gas into the loop at a small but constant rate, so that gas is cycled slowly through whether the diver is breathing or not.

Newest on the scene is the electronically-controlled semi-closed rebreather (ESCR), which depends on electronics to decide when and how much new gas needs to be added to the loop to maintain life support for the diver.

Third is the passive-addition semi-closed rebreather (PASCR), which is a totally mechanical system that replenishes the loop with new gas at a rate that is keyed directly to the diver’s own metabolic rate. In the case of the KISS GEM, which is a passive-addition system, new gas is added to the loop at a ratio of approximately 3 to 1 – extending the duration of any cylinders gas supply by a factor of three.

GEM is an acronym for Gas Extending Mechanism, a patented passive-addition system developed by KISS Rebreathers. The minimum nitrox mix for use with the GEM in a recreational diving scenario is 32 percent, with the more desirable, function mix anywhere between 36 and 40 percent. This is because the recirculation process in the loop will drop the oxygen content from the supply cylinder by 4 to 6 percent. Because this number remains a relative constant, there is not much guess work as what mix you are breathing.

The GEM is not a stand-alone apparatus, but rather an add-on system comprised of a scrubber, counterlung's, loop hose's and DSV mouthpiece designed to work with most any Nitrox-ready regulator, scuba cylinder (aluminum or steel) and technical BCD fitted with 2-inch webbing. The heart of this system is the scrubber canister. The top section of this canister – the head unit – is fitted with two hose attachment points and an over-pressure exhaust valve. The cylindrical bottom, which threads into the scrubber head, is sized to hold a single Micropore ExtendAir #SR-0801C large bore CO2 absorbent cartridge. 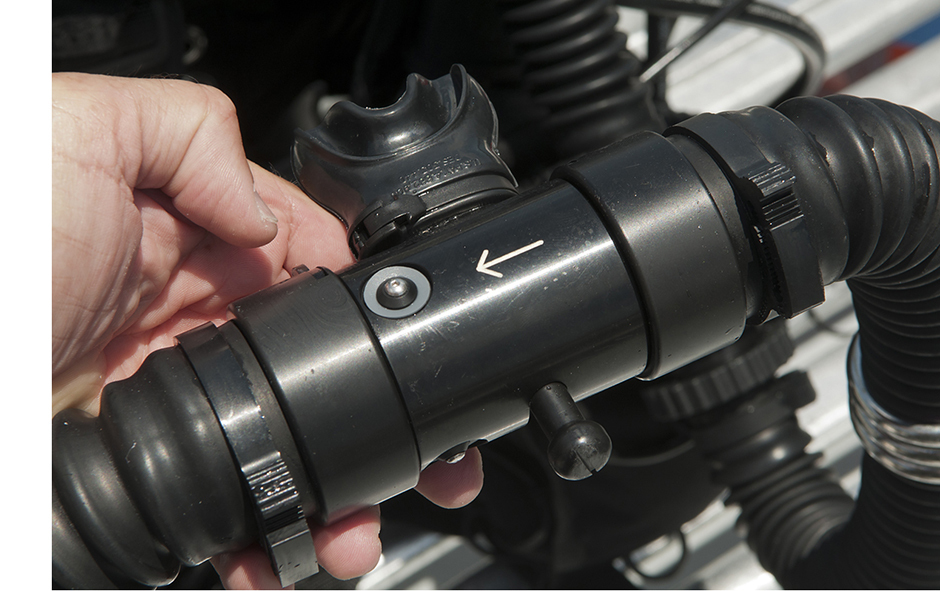 Results from Micropore Inc.’s own independent test of their scrubber in the GEM show that under a high workload at an equivalent depth of 131 ft / 40 m with a surround water temp of 39.2 F/4 C it held a full 68 minutes before showing signs of decline. (KISS Rebreathers also offers a separate canister kit to allow the use of Molecular 797 Grade (812 Mesh) Sofnolime.)

Assembled, the scrubber stands approximately 13.5 inches (34.3 cm) in height with an overall diameter of approximately 5.5 inches (14 cm) – about the same thickness as an aluminum 40CF cylinder. Included with the canister is a mounting system that ties to a BCD’s primary cam strap, allowing the system to attach to standard aluminum or steel scuba cylinders.

The rest of the system is front-mounted, consisting of two counterlungs fitted with protective coverings and mounting hardware with Velcro flaps for attachment to the 2-inch webbing on a technical style harness. The loop hoses (4 in all) connect the scrubber canister with the counterlungs via the T-pieces positioned above the upper chest, which transect to the DSV.

In addition to serving as recipient connection between the loop hoses and counterlungs, the T-piece atop the right hand counterlung features a built-in gas addition system (ADV) in the form of an Aqualung Mikron 2nd stage regulator. The left hand side T-piece houses a single oxygen sensor for monitoring the your PO2 in the loop.

The GEM’s gas delivery system utilizes a standard open-circuit regulator. To integrate an existing regulator system with the GEM, simply attach the hose that connects the ADV to the first stage. For bailout, retain at least one the regulator 2nd stages.

The key to this efficient rate of exchange is the GEM’s mouthpiece.
While it may look like a standard DSV mouthpiece, the GEM’s DSV actually features a specially designed piston-style valve that responds to the diver’s actual exhalation process in relation to hydrostatic pressure.

Here’s how it works: inside the mouthpiece’s barrel-shaped assembly is an inner, sliding barrel that moves to the right during exhalation. As you exhale, the air re-entering the mouthpiece pushes against the inner barrel, sliding it to the right like a piston. Once it reaches the end of its travel path, approximately one third of the gas is then allowed to escape, exiting through one of three small holes in the DSV. While this is going on, the remaining two-thirds of the gas is sent back into the breathing loop, where CO2 is removed by the chemical reaction within the scrubber. Once each exhalation is completed and the internal pressure within the mouthpiece drops, a pair of small but powerful earth magnets set into the right end of the inner barrel repel each other to push the barrel back to the left. 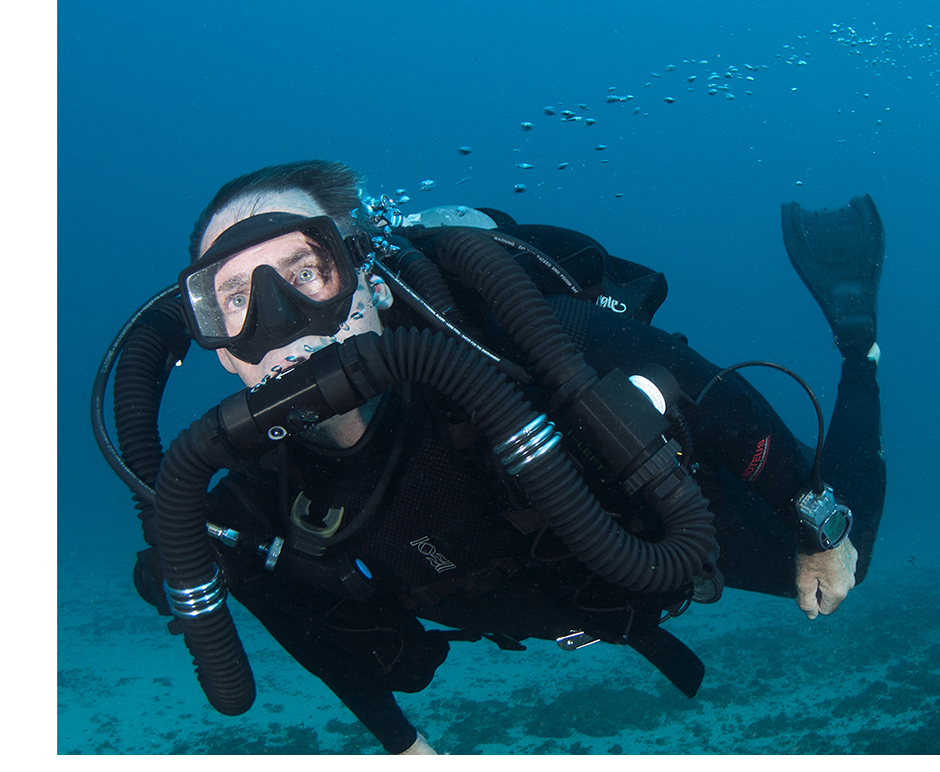 This simple mechanical process ensures that the work of breathing will remain constant regardless of whether the diver is breathing slow and relaxed, or hard and fast. The inner barrel also acts as a check valve, preventing any exhaled gas from returning to your lungs. While the DSV shunts and vents gas in the proper ratio, replenishment is taken care of by the GEM’s ADV (the Mikron regulator attached to the right counterlung). It is activated by a drop in loop volume, and replaces the same amount of gas that was just expelled. The amount of injected gas coming back to the loop is at a rate proportional to the diver’s Residual Minute Volume (RMV), meaning the replenish rate of new gas is directly related to the diver’s metabolic oxygen needs.
As with any rebreather, you still need a means of reporting what is going on in the loop in real time. When purchasing the GEM, divers have the choice between either a single Jetsam LED display or a Fischer Cable. 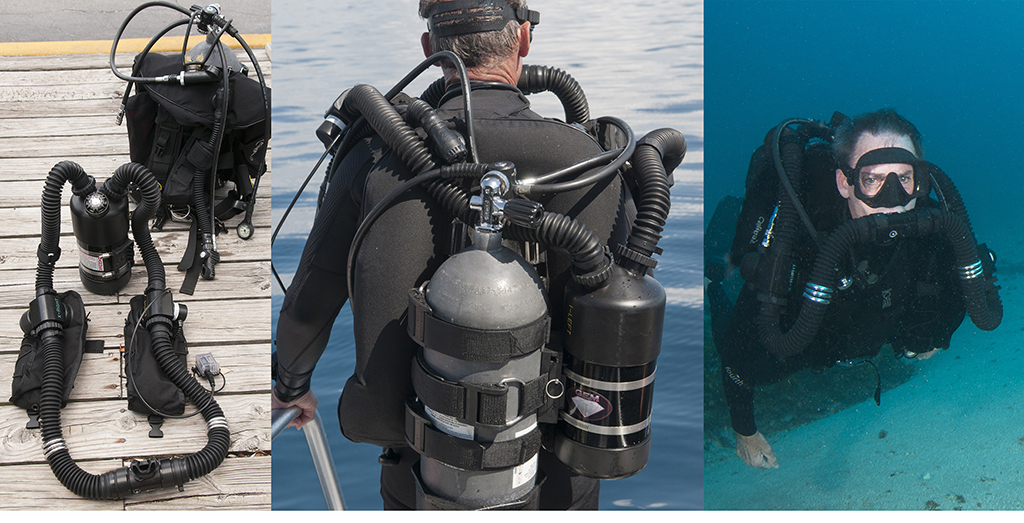 Both Shearwater's newer Petrel and older model Predator and Pursuits with Fischer ports can be integrated with the GEM when placed in SCR mode.

The KISS GEM does not include:

Save this product for later